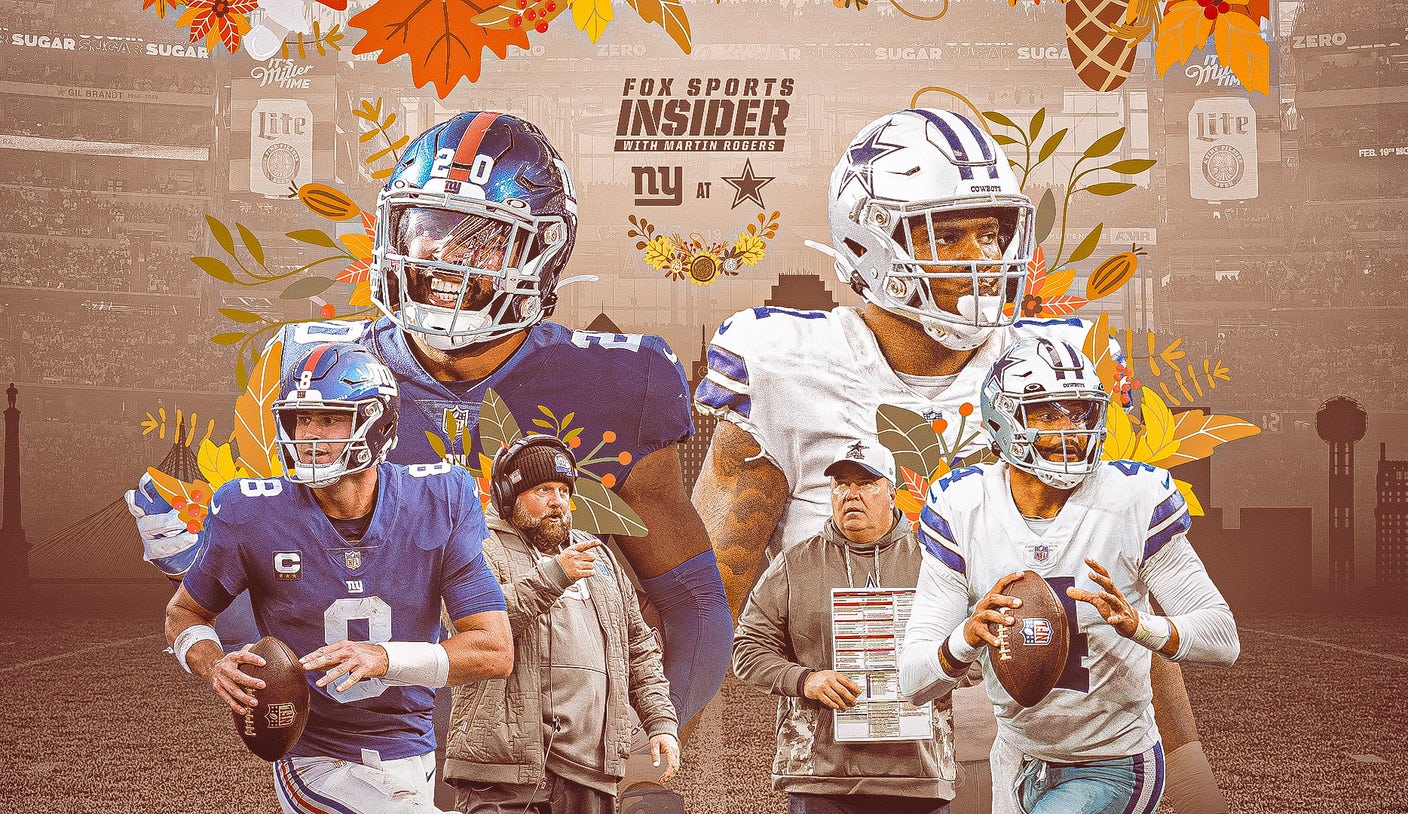 If you haven’t already, grab the TV remote and let’s get into this, for there’s not a moment to waste.

It is time to get started on the most preposterously excessive, and therefore monumentally enjoyable, four-day weekend of sporting consumption — so much and so varied that a weekend and a holiday sandwiched themselves together, and the four days will still barely be enough time to pack it all in.

It is going to be marvelous, exhausting, and potentially triumphant, depending on your rooting interest.

It is big enough and bold enough that we can make a few promises, stone-clad, money-back guarantees, with no fine print disclaimers and no need to worry about failing to make good on them.

It is going to be football, several types of it, all the time.

From the World Cup’s whopper-of-all-whoppers, the United States against England on Friday (2 p.m. ET, FOX and the FOX Sports app), to college football’s ultimate feud and a Thanksgiving treat between the Dallas Cowboys and the New York Giants (4:30 p.m. ET on FOX) in the fat, happy and juicy NFC East. Plus, a whole bunch of stuff before, between and after, most of it far too good to be described as mere filler.

What’s Thanksgiving without some football? The Cowboys are set to host the Giants in a crucial NFC East battle.

Spare a momentary thought for the USA soccer team. Yes, they get the opportunity of a lifetime on the biggest global stage of all, but with Thanksgiving taking place the day before the match they’ve had to shift back their turkey, stuffing and punkin’ pie to Saturday. Perfect way to celebrate a win, the optimist would say, though it should be noted England is a sizable favorite and one of the best teams in the tournament.

“It is going to be a big challenge and take tremendous focus,” American goalkeeper Matt Turner told reporters. “But we are looking forward to it.”

Take this to the bank; the next four-day window is going to be addicting, for that’s how it tends to go with these sports marathons, where no, double-digit hours of viewing nervousness is still not enough, and to pull yourself away from your screen (or screens) would lead to instant infection with this mean little disease called FOMO.

Hold me to this: There are going to be some “what the heck” moments, because sports is a numbers game and if you sit there for enough of the good stuff magic will cross your path. And isn’t there just something about our favorite athletes, that manic competitive gene, that so frequently brings out memorable performances when they know a huge audience is watching?

The United States’ hopes of advancing at the World Cup will be defined by Friday’s matchup with England, one of the pre-tournament favorites.

Sportsfest 2022 is not going to be particularly healthy, if we are to be honest. There is going to be too much food, because we never learn, and no, cheering on Christian Pulisic and Saquon Barkley and Blake Choir as they sprint goalward or hurtle to the end zone doesn’t mean that you’re getting a vicarious workout in.

It’s fine though. Burn off the calories later. Play catch up on your fresh air requirement next week. There’ll be time then.

We can’t guarantee the right results and there is a better than even chance, with all this activity, that you get your heart broken once or twice over the course of the gauntlet.

Is there ever a remedy for such things? More sport-watching, perhaps? Or some more green bean casserole?

“It is going to be distracting, but fantastic,” FOX college football analyst RJ Young told me as he prepared for Michigan to collide with Ohio State in Columbus (Noon ET on Saturday; FOX and the FOX Sports app).  “It is just a massive weekend for my sport, but even then I know I’m going to be non-stop checking out what’s going on in the soccer, and everything else.”

The action is virtually upon us now, but get a few things right before you glue yourself to the TV.

Some of our readers have previously shared horror stories of sporting equinoxes. One loyal consumer of this column once messaged to reveal an uneven couch over a long sports-viewing weekend led to a hip imbalance and later, a hip replacement. Ouch! Advice heeded. Plump up the cushions and get that fixed ahead of time, before the surgeon has to fix you.

The soccer slate is, frankly, ridiculous, the meatiest part of the World Cup’s group stage schedule and pure, unadulterated, round ball gluttony. There is the eternal splendor of Brazil (against Serbia on Thursday at 2 p.m. ET on FOX) and the can’t-miss-it soap opera of Cristiano Ronaldo’s Portugal swansong (against Ghana earlier Thursday at 11 a.m. ET).

Alexi Lalas debates whether Lionel Messi and Argentina’s World Cup hopes are over after their stunning loss against Saudi Arabia.

Saturday brings neighborly action from Mexico in a blockbuster against wounded Argentina (Saturday at 2 p.m. ET on FS1), preceded by world champion France against Denmark (11 a.m. ET on FS1). The highest-profile game of the group stage, Spain v. Germany (Sunday, 2 p.m. ET on FS1), just took on a whole new importance after the Germans were stunned by Japan.

“This says something about soccer, holding its own as part of the grandest weekend anyone can remember,” FOX soccer expert Alexi Lalas told me via telephone. “And for a good part of it, leading the way.”

College football has 13 Saturday games that feature Top 25 teams, on rivalry weekend, all building to a barnstormer of unbridled magnificence, “The Game.” Ohio State and Michigan will be seeking to knocking the festive stuffing out of each other, in what might turn out to be a College Football Playoff eliminator between two 11-0 squads.

“Our guys focused on it all offseason,” Buckeyes coach Ryan Day said. “During the season, it’s always been in the back of our minds. We work it every day of the year. The week is officially here.”

FOX Sports’ RJ Young is joined by Geoff Schwartz to preview the biggest game of the college football season between No. 3 Michigan and No. 2 Ohio State in Columbus.

The NFL, as ever, never gets overshadowed by anything, and it is a surprise we’ve waited until the third course of the column, with bellies already full, to really get into it.

On Sunday, there are several worthy options, none more appropriate than the defending Super Bowl champion Los Angeles Rams — who have shown perhaps what happens when you overfeed (or overspend) — taking on arguably this year’s title favorite, the Kansas City Chiefs (Sunday at 4:25 p.m. ET on FOX).

The Cowboys and Giants stir some emotions in any year, but this one, with playoff implications and divisional positioning on the line — heck, possibly the entire identity of their campaigns — it is a Thursday battle to whet any appetite.

Joel Klatt looks into the biggest question heading into “The Game” and he has concerns over the health of Michigan’s Blake Corum.

But there hasn’t ever been a four-day weekend of multi-code football action on this scale. Probably just as well, for could we really handle all this activity every year? Spoil us, but don’t spoil us too much.

Whatever, that’s a question for Monday. When we’ll be feeling, somehow, as bruised and battered as the players, punch-drunk and nursing the food coma aftereffects, needing — after a delicious marathon of sitting down and watching sports — a rest.

BEST SPORTS WEEKEND EVER: All games mentioned are available on the FOX Sports App and FOXSports.com. Subscribe to your favorite sports and teams by scrolling down and clicking on the tiles below this story, and we’ll send you live updates on your favorite teams.

‘One more to play for a championship’: TCU enters Big 12 title game undefeated