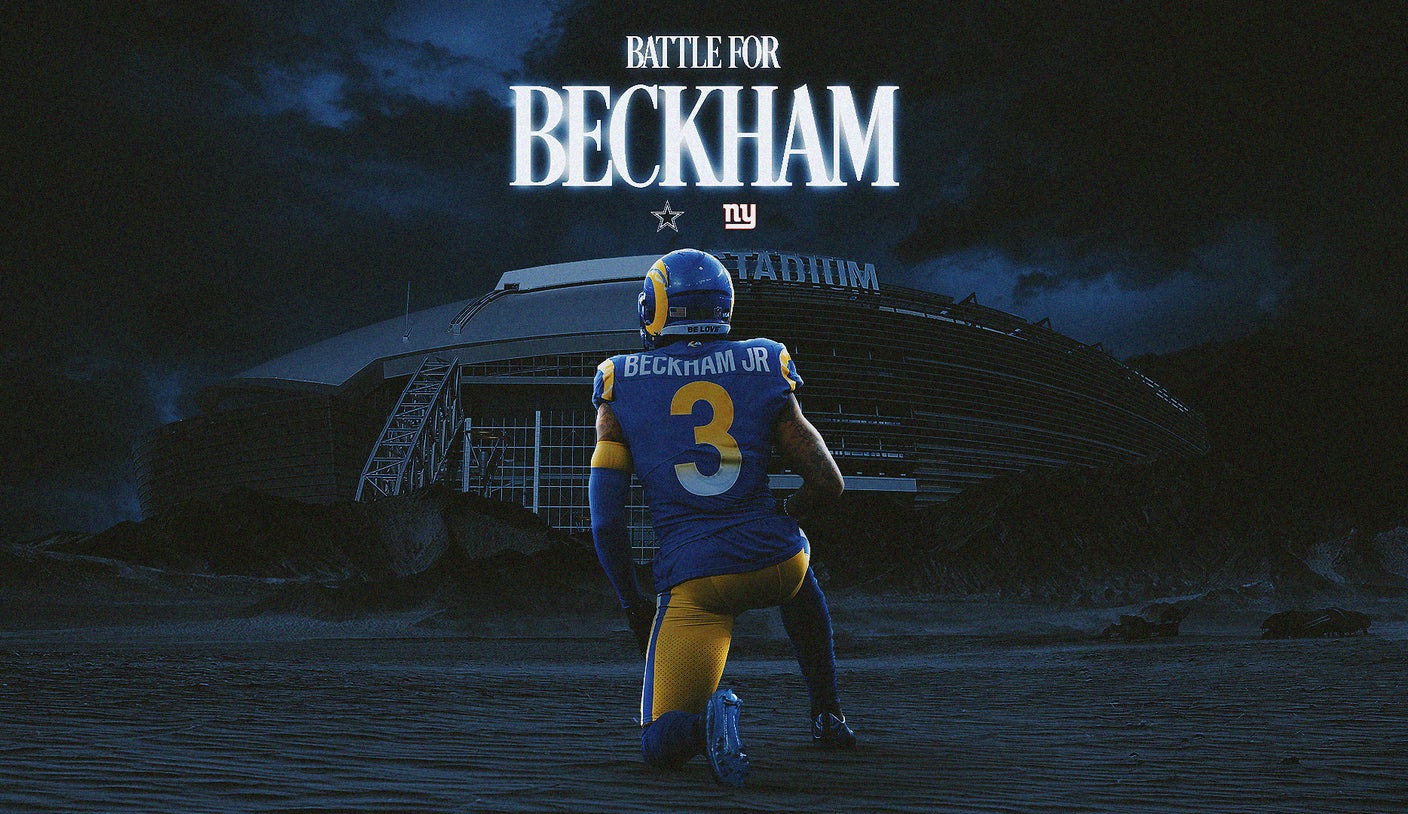 Cowboys, Giants prepare for battle — on Thanksgiving, then for OBJ

There’s a lot at stake in the Thanksgiving showdown between the New York Giants and the Dallas Cowboys (4:30 p.m. ET on FOX). The winner gets sole possession of second place in the NFC East. The losers might end up having to fight for their playoff lives.

But it’s after the game and after the turkey when things will really get interesting between these division rivals. Because that’s when the “Beckham Bowl” will really begin.

Both the Giants (7-3) and Cowboys (7-3) are prime contenders to land Odell Beckham Jr., the 30-year-old, oft-injured, free-agent receiver who is hoping to find a new team by early December. He plans to visit both teams, multiple league sources have confirmed, and both teams have some level of interest in signing him if he’s fully recovered the torn ACL he suffered at last season’s Super Bowl.

The Cowboys have made a public spectacle of how much they want and need him. The Giants have been more subtle, but they clearly need receiving help, too. And almost everyone around the NFL believes Beckham will sign with one of them, soon.

So here’s an in-depth look at the Battle for Beckham, with the help of various NFL sources, including a peek at the contenders, the financial ramifications, and what kind of prize Beckham really is.

What does Beckham want?

Aside from a chance to play, and to prove he’s recovered from his second ACL surgery in a 16-month span, Beckham wants what he has always wanted: money and attention. As one league source said, “He wants to be wanted,” which explains why the Cowboys wouldn’t stop talking about him until they finally went silent on Tuesday afternoon.

Beyond that, league sources confirmed the report that Beckham is telling teams he wants a deal similar to the three-year, $60 million contract the Bucs gave Chris Godwin in March that included $40 million guaranteed, just three months after he tore his ACL. Of course, Godwin is 26 and has torn his ACL only once.

Will Beckham get what he wants?

Yes on the attention and the chance to play. As for the contract demands, many NFL people are dubious that there will be enough of a bidding war to get him a deal like that.

“Unless you’re desperate, it’s crazy to pay that kind of money to a receiver his age and with his injury history,” one NFL executive said. “You’ve got to have an ‘out’ [in the contract] at least.”

Much more likely, Beckham will sign a deal that his agents can trumpet as averaging $20 million per year, but that will end up being heavy in incentives and will give a team a chance to cut him loose with minimal financial pain this offseason. Still, OBJ’s unreasonable demand makes it clear that he won’t come cheap.

Can he even play this year?

Good question, and one that has no concrete answer. One NFL source said there’s “considerable doubt” around the league about that, which explains why Beckham is embarking on a free-agent tour. No one is going to sign him without an extensive physical to make sure his knee is sound. Beckham’s people say it is, but there’s no way to know for sure until a team doctor gets a look at it. And even if he can play, his age and the recent damage to that knee makes it questionable he can again be the player he used to be.

Can the Cowboys afford him?

They have $6.4 million in salary cap space left this season, so yes, they can squeeze him in even if they have to pay him $4-5 million (which many believe is what Beckham wants for the rest of this season). A long-term commitment is trickier since they’re not in great cap shape for 2023. They are projected to only have about $8 million in space, according to Overthecap.com, and they still have to sign RB Tony Pollardamong others. Anything is doable when it comes to the salary cap, but they’ll have to do some work.

Can the Giants afford him?

Yes, but only on a long-term deal. They only have about $3 million in cap space and GM Joe Schoen has already lamented that he might have to restructure a contract or two just to get through the season — something he has made clear he really, really doesn’t want to do.

The Giants are in much better shape for 2023, when Overthecap.com projects them to have $59 million (though that’s not including possible deals for RB Saquon BarkleyQB daniel jones and S Julian Love). So they can backload the contract or spread it out to minimize the cap hit this year. But it probably requires something of a financial commitment to Beckham in 2023 to make what he wants actually work.

Why he makes sense for the Cowboys

They are a championship contender now that QB Dak Prescott is healthy. They have the quarterback, a running game, a strong defense and dangerous pass rush. About the only thing the Cowboys are missing is a second receiver, which really could be what puts them over the top.

Beckham may be a risk, but his talent is miles above anything the Cowboys will find on the waiver wire or the street this late in the season. If he can play, he’ll command the attention of defenses no matter his condition, and if he’s healthy he’s a game-breaking receiver. Just look at what he did for the Rams in the playoffs last season, with 21 catches for 288 yards and two touchdowns in 3½ games before he tore his ACL again.

Yes, it will take some cap gymnastics and future financial pain to meet his demands. But the Cowboys are a win-now team with an 80-year-old owner in search of their first Super Bowl appearance in 27 years. They’ll figure it out. They’re not going to care about cap ramifications for 2024 or beyond.

“Odell Beckham Jr. was born to play for the Cowboys”

Skip Bayless explains why Jerry Jones must sign Odell Beckham Jr. as the Cowboys gear up for the second half of the season with their eyes set on the Super Bowl.

Why he doesn’t make sense for the Cowboys

The only reason is that they don’t have a ton of cap room. Now, teams can always find cap room, but there’s a future cost to doing that. Unless Beckham ends up taking a lot less than he wants, the Cowboys are going to have to commit cap space to him for several years. That’s a risk since at his age and with his damaged knee, he might not be able to play much longer.

Why he makes sense for the Giants

Right now, they have the worst receiving corps in the league. They are led by Darius Slaytonwhom they nearly cut this summer. Their next leading receiver is Richie Jamesa return specialist with questionable hands. Their third receiver is Isaiah Hodginswho has been a Giant for about three weeks. And then there’s Kenny Golladaywho has a $72 million contract and is so bad that coach Brian Daboll won’t use him despite all their other receiver issues.

The Giants didn’t expect to compete for a championship this year, but if they want to make the playoffs after their surprising start and see what happens when they get there, they need to boost their passing game and give Jones some help. Right now, he’s working with a bunch of guys who would struggle to make a lot of NFL rosters. They’re not going to keep winning if defenses know all they have to do is stop Barkley by putting nine defenders up in the box.

Where is OBJ’s best fit?

Why he doesn’t make sense for the Giants

Schoen’s approach to the Giants has been all about common sense and not mortgaging the future. That’s why he didn’t make a trade for a much-needed receiver at the deadline. He didn’t want to give up draft picks and cap space. He’s always targeting the 2023 offseason as the place where he can really start building his team.

So why mess that up now, especially with a big financial commitment to a 30-year-old receiver coming off two ACL surgeries? Short-term, sure Beckham would help. For a low-cost deal for the rest of this season? Go ahead and do it. But is he really going to put the Giants over the top by showing up in mid-December and playing a few games once he learns the offense? No, because they’re just not that close.

The Giants are just not a win-now team, and they have too many holes to fill in the offseason. They have a great opportunity in 2022, but it’s not worth sacrificing their chances to be even better in 2023.

And the winner is …?

How ‘bout them Cowboys?

Unless another team makes a stealthy move into this race (like the Buffalo Bills or Kansas City Chiefs), no team is more motivated and no team has a bigger need for that second receiver than the Boys. And given the amount that Jerry Jones, Stephen Jones, Mike McCarthy, Dak Prescott and half the Cowboys roster have talked about OBJ, Jerry won’t let himself get out-bid for Beckham’s services.

The only catch is that the Cowboys have to believe Beckham is healthy and can be a force for them in the playoffs. If they do … well, as Jerry Jones said, “I know the Cowboys star on that helmet, when he puts it on, could look pretty good.”

Should Spain be the World Cup FAVORITES after dominating victory over Costa Rica? | SOTU

Are Germany’s World Cup hopes OVER AGAIN after shocking loss vs. Japan? | SOTU

Nick is betting on Giants to bounce back and feast against Cowboys on Thanksgiving | What’s Wright?

Should Spain be the World Cup FAVORITES after dominating victory over Costa Rica? | SOTU

Who is Tim Weah? Inside the USMNT World Cup roster