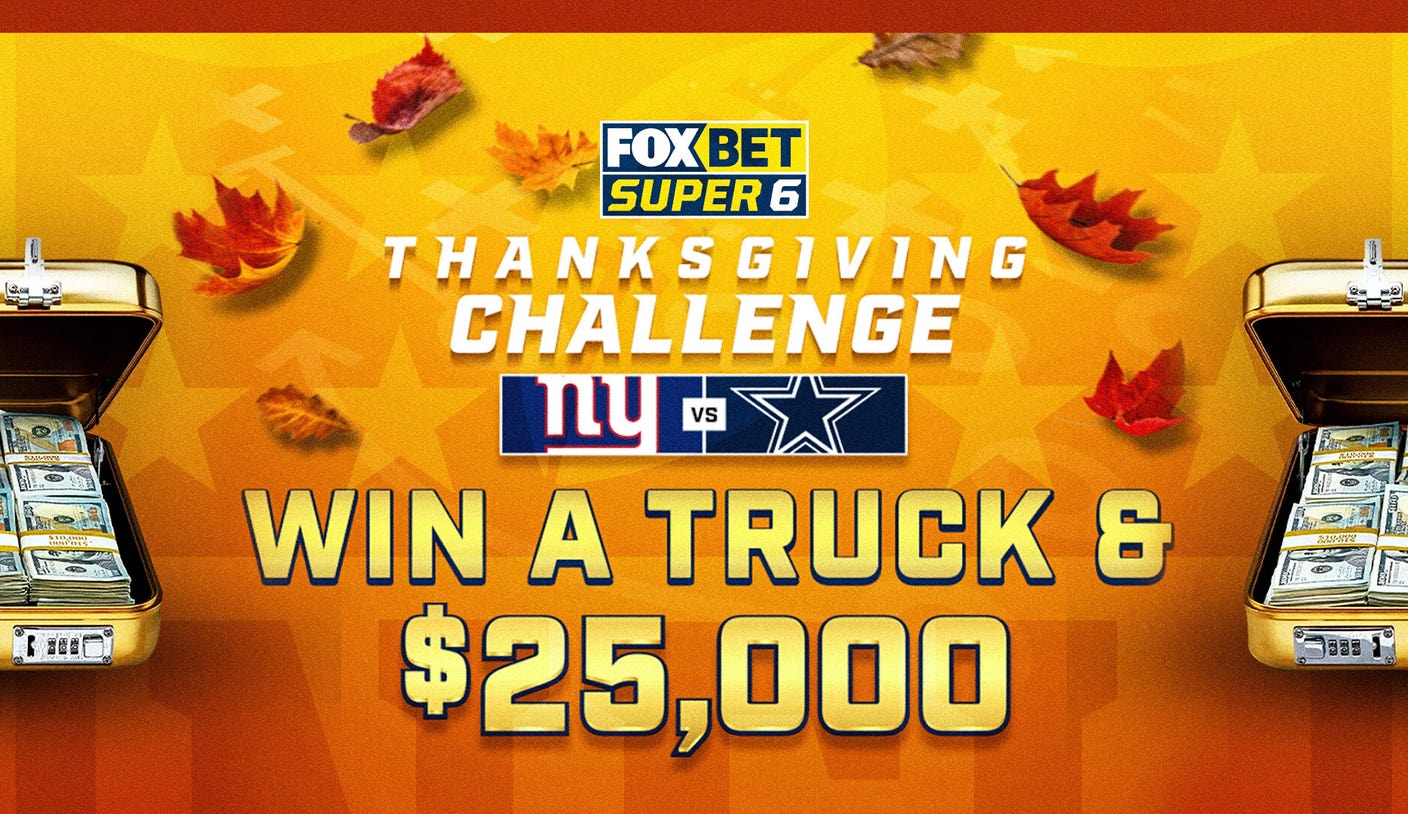 Are you guys ready for the annual Thanksgiving debates? Let’s do it.

Do you call it dressing or stuffing? Should Thanksgiving dinner be served in the afternoon or early in the evening? Is macaroni a side or a main dish?

These pressing questions are racing through everyone’s minds at night while the turkey roasts.

And this holiday, we’re adding six more questions to that list in the FOX Bet Super 6 Thanksgiving Challenge. Stay with us, okay, because $25,000 is at stake, AND so is a brand-new truck — courtesy of Michael Strahan.

The FOX Bet Super 6 Thanksgiving Challenge is a free-to-play contest in the FOX Bet Super 6 app where you pick six different outcomes from the marquee matchup between the New York Giants and the Dallas Cowboys on FOX. From the team with the most rushing yards to the total points scored in the game, predict all six perfectly, and you could be on your way to a $25,000 payout.

And the truck? Well, after you make your selections and submit your picks in the app, you have the option to enter the sweepstakes to win Strahan’s nice new wheels.

A jackpot worth 25 grand and a new ride? Sign me up.

It’s free to play, it’s easy, it’s fun and people really do win. Just download the app and get your picks in before the game kicks off on Turkey Day. And if you need help with the picks, we have you covered!

Check out our predictions below for this huge Giants-Cowboys battle!

How many total points will be scored in the game?

At FOX Betthe Over/Under for this game is currently set to 44.5. And it’s also important to note that this year, both these teams’ games have hit the Under more often than not. The Under has hit in seven out of 10 Cowboys games and in eight out of 10 Giants matchups.

But we’re expecting lots of points in this game. Let’s talk about why.

Since 2016, when America’s Team plays NFC East opponents at home, the Over has hit 14 out of 20 times. And if both offenses wait until post game to devour some Turducken, everybody should be light enough on their feet to run up the scoreboard.

Which team will have the most passing yards and how many will they have?

daniel jones absolutely let it fly in the Giants’ Week 11 loss to the Lionsthrowing for a cool 341 yards. But if you take the sample size of each team’s last three games, Dak has consistently passed for more yards than Daniel. In the Cowboys’ last three games, Dak’s passing yards have been 250, 265 and 276.

Prescott & Co. have the edge here.

Which team will have the most rushing yards and how many will they have?

From letting Zeke eat to having Tony tote the rock, the Cowboys do damage on the ground. The squad’s 136.2 yards per game ranks eighth in the league. However, the New York Football Giants actually run the ball better. They’re averaging 157.2 rushing yards in their games this season.

Which team will have the longest punt, and how long will it be?

Punters need love, too, and this is why this is one of our favorite questions for this contest.

We’re backing Bryan on this one.

Which team will have the longest field goal, and how long will it be?

From punters to kickers, we’re showing how grateful we are for special teams players during this Thanksgiving showdown. And it’s the Cowboys’ kicker Brett Maher we like better in this matchup. Maher’s 60-yard field goal is the second-longest in the NFL this year. He also had a huge game against the Vikings last weekend, so let’s ride the hot hand, or should we say leg.

Which team will win and by how many points?

This Thanksgiving, we’d be especially grateful to see a competitive game that’s exciting for all 60 minutes. Santa, is that too much to ask? Wait, wrong holiday.

At any rate, we expect the Giants to keep it interesting, but ultimately, we see Dallas winning a close one at home.

Are you ready to try your luck at winning $25,000 and a chance at a new truck on Thanksgiving’s most exciting matchup?

Download the FOX Bet Super 6 app right now, make your selections and submit your picks before Giants-Cowboys kick off. Remember to share your picks on social media by tagging us at @FOXSuper6, @EricaReneeD and by using the #EricaSuper6 hashtag.

This Turkey Day could be the day you win big!