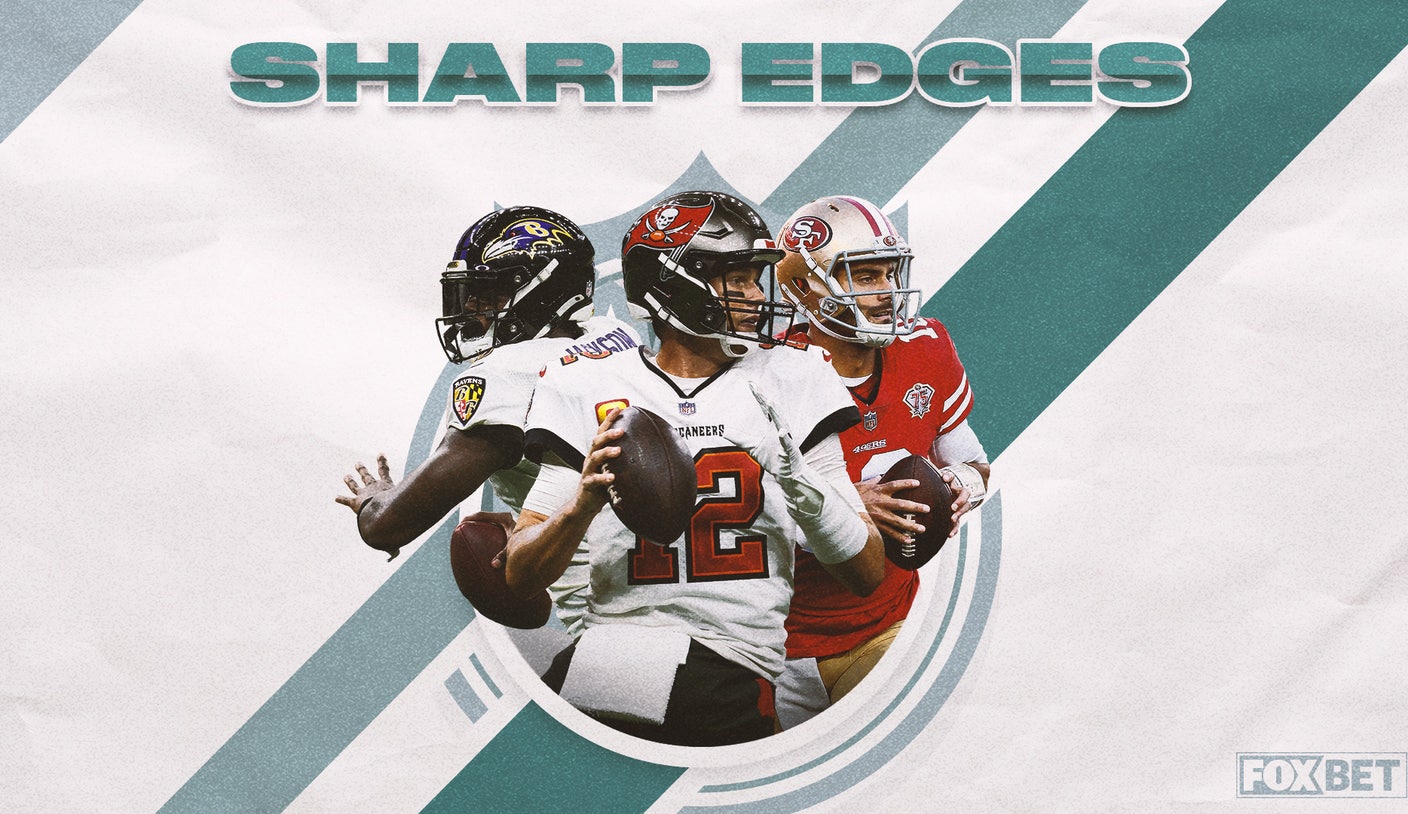 This week’s NFL slate features some great matchups, including the Saints-49ers game on FOX.

As for how you should wager on the games, I ran my models to give you my favorite betting edges and predictions for Week 12 of the season. My goal for this weekly column is to always provide you with nuggets you didn’t know before reading this piece.

A couple of matchups stuck out from a betting perspective, so let’s look at my favorite edges of the week, with odds courtesy of FOX Bet.

While on a totally different spectrum of respect and notoriety, the Patriots defense is similar to the Cowboys defense in several statistics.

These were all numbers while playing with the No. 1 graded LT, Christian Darrisaw. Now, they are without Darrisaw.

You also have the veteran coach vs. first-time coach on a short-week angle. Typically, this favors the more experienced team as their coach knows how to prepare them to play on a short week.

Sure, in some of these games, they were favored by over a TD. But when not made a favorite of four-plus points, Belichick is actually 10-3 SU and ATS, playing on a line that is an average zero points and covering by nearly a full TD on average (6.7 points per game).

This is Kevin O’Connell’s second game playing on short rest. His first game was against the Lions in Week 3, which was still a Sunday game but followed by a Monday night game. The Vikings got down 14-0 against the Lions. They needed to outscore Detroit 14-0 in the fourth quarter and narrowly escaped with a four-point home victory.

Since the start of the 2019 season, the Kirk Cousins-led Vikings are 2-6-1 ATS when playing with less than a week of preparation, although they are 2-0 SU and 1-1 ATS on Thursdays.

Even with the addition of T.J. Hockensonthe Vikings are still using similar rates of 11 personnel:

This is an issue for the Vikings because Belichick’s defense is quite strong vs. 11 personnel.

It is hard to be optimistic about the Patriots offense unless you look at it with the understanding that the Jets defense is quite outstanding. Since returning as the full-time starter for the Patriots, Mac Jones has done nothing but play top-10 defenses (NYJ twice and IND). The Vikings defense ranks a below-average No. 19 on the season.

I like the Patriots as underdogs and would use them in teasers or buy the number to 3.

As big a fan of Lamar Jackson as I am, it is difficult to look at this offense and suggest he isn’t contributing in some capacity to their struggles.

The Ravens have rattled off four straight wins, with three of the four coming vs. the lowly NFC South. But Jackson hasn’t recorded over 7.5 YPA in any game since Week 3. Since that win vs. the Patriots, Jackson is averaging just 6.1 YPA and 63% completions with just six touchdowns and five interceptions while taking 17 sacks in seven games.

Baltimore just doesn’t have the receiving weapons. Mark Andrews is playing, but he is less than 100%. To show you how desperate this team has been at skill positions to support Lamar Jackson, since Week 6, the Ravens leading receiver is Demarcus Robinsonand the leading rusher is Kenyan Drake.

Both of these players were cut by the Raiders in August.

While they’ve ranked above average in pressure rate throughout the season, since Week 6, the Jaguars have improved further. They rank No. 6 in pressure rate despite blitzing at the 10th lowest rate.

And since Week 6, Jacksonville has ranked top-10 in both EPA/RB rush and yards before contact per rush.

The Jaguars have extra rest to help game plan for Lamar Jackson’s run game coming off their bye. When teams play Lamar with over seven days rest, the Under is 7-4, going under an average 45.5 point total by over three points per game.

Jacksonville’s primary concern is Mark Andrews, as the Jaguars rank No. 32 in EPA/att and No. 30 in YPA on targets to opposing TEs. Last week, Andrews finally was back to running a standard number of routes, but he wasn’t nearly as explosive. He averaged a season-low 2.0 yards after the catch, and his longest reception was only 16 yards, his second-lowest total of the season.

PICK: Under 43.5 points scored by both teams combined at FOX Bet

Jimmy Garoppolo is (once again) leading the NFL in YAC/completion at 7.3 yards after the catch per completion.

A ranking of the team with the most YAC per reception, by year, over the last five years:

The 2022 team is averaging more YAC/reception than in any of those prior seasons.

Garoppolo is quietly having one of his best seasons as a pro. In addition to averaging the most YAC, he’s…

But here’s the thing: out of 38 QBs with 100-plus attempts this year, Jimmy G ranks 30th in air yards per attempt. That’s part of the reason he has so much YAC.

He ranks No. 34 of 38 in percentage of attempts that travel 10-plus yards.

Look at the Saints defensive pass splits by targeted distance:

The Saints rank No. 30 in pressure rate, and they rarely blitz. That’s perfect for Jimmy G.

And on the ground, the Saints are getting moved off the line and allow the fourth-most yards before contact per early-down RB-rush this season.

Over the last two weeks, the Saints played teams that could not run the ball on the season (Steelers and Ramsboth ranked bottom-10).

The Rams and Steelers rank bottom-five in yards before contact per RB-rush.

This is a bad matchup on the ground and in the air for the Saints defense.

For a run-first team like the Colts, the first place you want to start when analyzing a matchup is whether their opponent can successfully stop the run.

The answer has been no over the last three games, as the Patriots, Raiders and Eagles ranked No. 21, 24 and 28 vs. the run. The Colts still went 1-2 in those games, although they went 1-1 with Matt Ryan.

On the season, the Colts are 3-2-1 vs. teams that rank below average defending the run.

They upset the Chiefs, Broncos and Raiders, tied the Texans and lost to the Eagles (by only one point) and Patriots.

Against mid-tier run defenses, ranking 10-19, the Colts are 1-1, splitting games with the No. 15-ranked Jags defense.

But against top-10 run defenses, the Colts are 0-3, losing to Washington and being swept by the Titans, and scoring 10, 16 and 17 points in those three games.

Now the Colts must face the No. 7 run defense of the Steelers. And it’s actually a better run defense than No. 7, because, for most of the season, they were without T.J. Watt.

Running backs tend to see a lot of volume against the Steelers because Pittsburgh doesn’t score a lot nor pull away in games. But from an efficiency perspective, Pittsburgh should be able to limit what is most important to the Colts.

We also have massive pressure splits for Matt Ryan. When he’s pressured, he ranks No. 29 in EPA/att. But he delivers average efficiency when kept clean.

Pittsburgh’s defense can do enough to keep this game close. Buy this line to 3 or use Steelers in teasers.

As mentioned in this very article two weeks ago, the Bucs have massive splits with and without Akiem Hicks on the field. This isn’t a shock, as the Bears had massive splits for years when he was in the lineup.

Hicks was instrumental in the win against the Seahawks in Germany, registering a season-high four tackles while clogging up the middle of the line and holding Kenneth Walker III to a season-low 1.7 YPC with a season-low longest run of only five yards.

Last week against a Bills defense that was on the ropes with terrible travel and health situations, the Browns averaged a season-low 3.1 YPC, but it was even worse if you strip out Jacoby Brissett’s long run.

The Browns RBs gained just 51 yards on 19 rushes for 2.7 YPC. They averaged -0.68 yards before contact per rush. All of those numbers were season-lows.

What happened? The Browns lost starting C Ethan Pocic on the first drive of the game with a knee injury, and from that point onward, they couldn’t run the ball at all. This makes sense because C is a highly underrated position and Pocic ranked second in run-blocking grades for Centers at PFF.  In fact, he’s the second overall graded center. Losing him is a massive loss in this game for two reasons: first, the defensive line the Bucs bring to town, and second, the weather, which is expected to feature 20 mph winds with gusts into the low 30s. Running will be even more important.

With Hicks, the Bucs rank as the NFL’s No. 1 run defense in EPA/rush to RBs. The Browns rank 32nd. And they allow the 2nd most yards before contact per rush.

Warren Sharp is an NFL analyst for FOX Sports. He is the founder of Sharp Football Analysis and has worked as a consultant for league franchises while also previously contributing to ESPN and The Ringer, among other outlets. He studied engineering before using his statistical acumen to create predictive football models. You can follow Warren on Twitter at @SharpFootball.

World Cup Now: How dangerous can Morocco be in Round of 16?