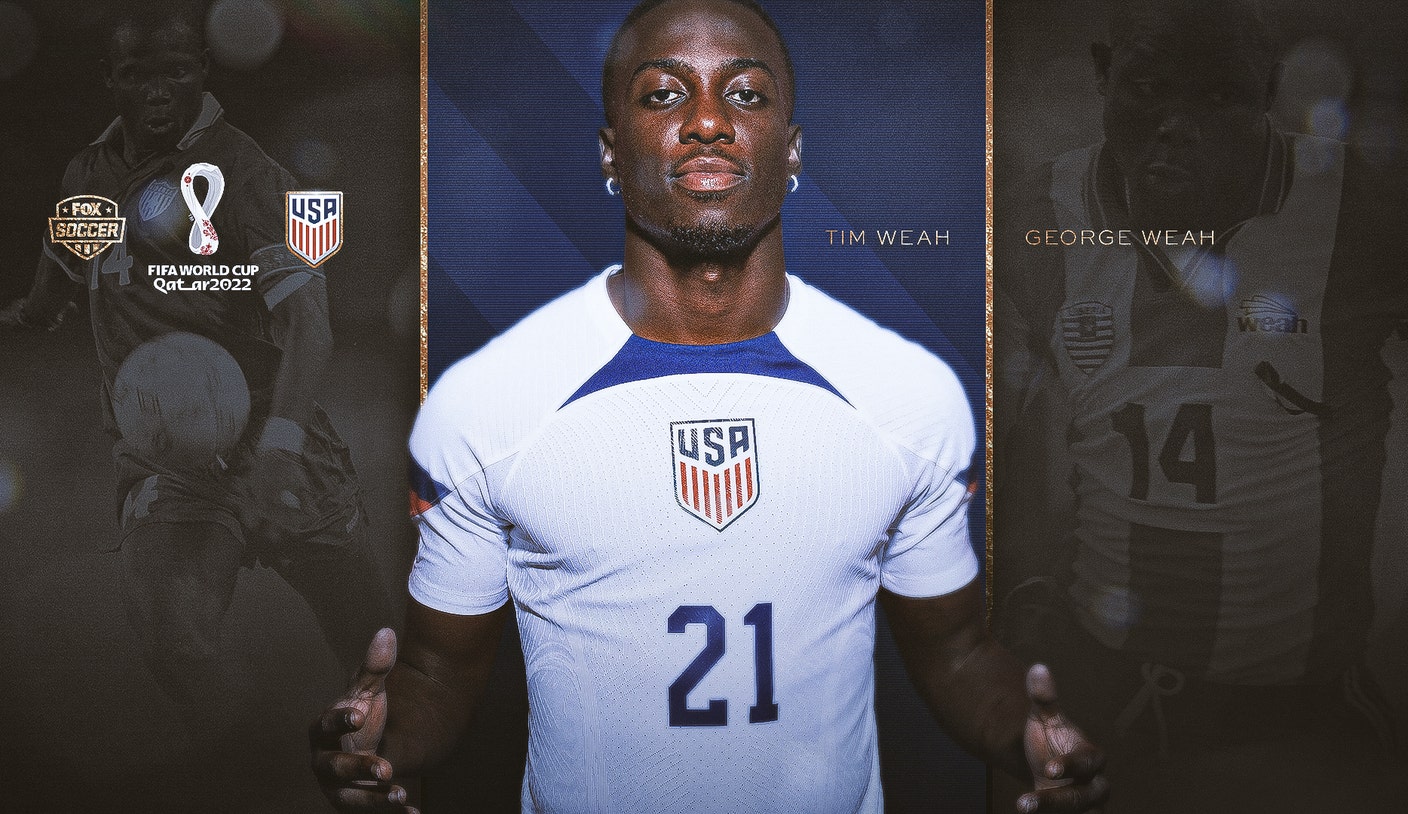 Editor’s note: With his first-half goal against Wales on Nov. 21, Tim Weah scored the first goal for the USMNT at a World Cup in eight years. Below is a story that originally published Nov. 17 as he was entering the tournament.

There are no special protocols for Tim Weah to call or text his dad. Communicating with a head of state is actually pretty easy for him.

“I hit him up on WhatsApp,” says Weah, a forward for the United States men’s national team. “If he’s busy, he won’t answer, just like if I’m busy, I won’t answer. My dad is the most normal person you will ever meet. He wakes up and goes to play pickup basketball or soccer.”

George Weah is the president of his native Liberia. But he’s also soccer royalty.

He grew up in Liberia’s impoverished capital city of Monrovia playing with homemade balls. But he rose to the top of his sport, even winning the Ballon d’Or, soccer’s greatest individual honor. He was a world-class striker for AS Monaco, Paris Saint-Germain and AC Milan, was the top scorer in UEFA Champions League in 1995 and won FIFA World Player of the Year that same year. He was runner-up in 1996.

His childhood sparked a passion for humanitarian work, and he used his platform for good, becoming a UNICEF Goodwill Ambassador before running for president of Liberia. He’s currently serving a six-year term.

Despite his storybook life, there was one thing that eluded the elder Weah: He never played in a World Cup.

Liberia was overrun by civil war during the height of his playing days, and the closest he ever came to delivering his country a World Cup berth was in 2002 when it missed out on qualifying by one point to Nigeria.

On Monday, though, he will watch Tim get the opportunity to play, and maybe even start, for the United States at the World Cup in Qatar.

“I think it’s gonna mean the world to him,” Tim Weah told FOX Sports. “Seeing his son on a stage and following in his footsteps is dope. If I had a son or a daughter and I was watching them play in a World Cup, I’d be happy, too.”

George and Clar, Tim’s mother, are expected to attend the U.S. men’s national team’s opening match against Wales on Nov. 21 at Ahmet bin Ali Stadium (2 p.m. ET on FOX and the FOX Sports App). They’ll watch the game in a FIFA suite rather than with other U.S. parents, as is custom for attending heads of state.

Growing up as the son of a soccer legend had its perks. Tim met some of his idols, like former Nigerian national team star Jay-Jay Okocha, who he deems “one of the sickest players technically.” And he has had conversations with former Arsenal manager Arsene Wenger, who coached George at Monaco and mentored his father throughout his career.

But while Tim always embraced his family’s legacy, he has never wanted to solely rely on it.

“Even without the name, Tim was ready to work,” says Kyle Duncan, Weah’s cousin who plays right back for the New York Red Bulls. “He was always good, always had the gift. Some people who have talent are lazy, but he was never lazy.”

That was something Weah’s U.S. teammates learned quickly. He is proud of his father’s accomplishments but is very much his own person.

“He does his own thing, and I think it’s very easy for someone who’s in his position to get caught up in what their parents did and not have their own life,” says defender DeAndre Yedlin, Weah’s closest friend on the team. “But it doesn’t phase him. He gets on with his work, he has got his own brand and his own character, and I’ve got a lot of respect for him.”

Adds center back Walker Zimmerman: “I kind of knew before I met him who his dad was and couldn’t believe it. This guy is royalty, you know? And then you meet Tim, and you’re like, he always brings the laughs, always brings the well-timed under-the-breath comments. He brings good vibes and good music to the locker room, and I really can’t speak enough about him as a professional.”

[Why Walker Zimmerman is the leader the USMNT needs]

It was clear from an early age that Tim Weah would be a special player. He kicked his first soccer ball as soon as he started walking. Duncan remembers one of Weah’s birthday parties when he was asked what he was going to wish for when he blew out his candles.

“He wasn’t supposed to say it out loud, but he said he wished to be a professional soccer player,” Duncan says. “I was three years older than him and was like, damn, I wasn’t even thinking about [my future] yet.”

Weah split time growing up between the New York metro area and South Florida, where his mother was his soccer coach. When he was old enough, Tim joined the Red Bulls Academy. When he was 14, he moved to France and played for PSG’s Academy. When he was 17, Tim signed his first professional contract with PSG. He scored a hat trick for the U17 national team at the U17 World Cup against Paraguay in the round of 16, becoming the first American male at any level to score a hat trick in the knockout round of a FIFA competition.

“To be honest, this was such a weird way to break out,” Weah says. “I had just an OK tournament, but then I scored a hat trick, so that was a blessing. After that, it was just about working hard, and the rest is history.”

Weah was eligible to play for four different national teams — France (through residency), Jamaica (mother’s home country) and Liberia (father’s) — but says choosing the U.S. was an easy decision.

“I wasn’t thinking about anything else,” he says. “Obviously my roots will always be my roots, but I grew up in the States. I lived here my whole life. My family and friends are here. I started playing with the national team when I was 12, so it was never like I had to pick a side. I didn’t really have to make a decision.”

In March 2018, Weah became the first player born in 2000 to earn a senior national team cap, coming on as a substitute in a game against Paraguay. Since then, he has earned 25 caps, started eight of 14 World Cup qualifiers, and scored three goals for the USMNT.

He also has won three Ligue 1 titles — two with PSG and one with Lille — and been through the injury gauntlet. He had season-ending hamstring surgery in February 2020 and later missed more time after hurting his quad. He dealt with another nagging injury to start this past club season and missed the two USMNT friendlies in September. He returned to play for Lille in October.

Now, everything is culminating in Qatar, where the 22-year-old Weah figures to play an integral role for a young USMNT that is trying to change the global perception of American soccer. Not just as the team’s designated DJ — he has a recording studio at his home in France — but as a dominant and creative attacker who Yedlin says is “just a handful for defenses.”

“He’s electric,” Yedlin continues. “He’s a nightmare for defenses. He gets in behind, takes you on one-on-one. He’s got a crazy shot. I was talking to [U.S. goalkeeper] Sean Johnson the other day, and he said the player on the team who has the best strike and can hit the ball the best is Tim.

“I was like, that’s actually true. He can bang a ball. Playing against wingers like that is not something you want to go up against. So I’m glad he’s on our team and not one we’ve gotta face.”

Off the field, in addition to his love of music and fashion — he has been to Paris Fashion Week and wants to start his own line someday — Weah shares his father’s passion for humanitarian work. He doesn’t have political aspirations but does want to start his own foundation in Africa and build a soccer academy. He says his mother wants him to adopt kids.

He tries to visit Liberia every December, and his parents encourage him to bring friends. Yedlin said he wants to go with him.

“People think of Liberia as barren, no trees, but it’s really not,” Weah says. “There are beautiful beaches, hotels, homes. It’s a vibe. It definitely slows you down. After a hard season, it’s a place you want to go meditate and be one with the earth.”

Carrying all of that with him, whether he starts or not, Weah will make his World Cup debut with his superstar father watching from the stands.

“It’s a blessing,” Weah says. “It will be an honor to represent my family on the biggest stage ever and represent my country. Everyone will be happy living the dream through me.”

College Football Playoff Rankings: Ohio State drops to No. 5, but still has a path